Babylon Steel, ex-sword-for-hire, ex…other things, runs the best brothel in Scalentine; city of many portals, two moons, and a wide variety of races, were-creatures, and religions, not to mention the occasional insane warlock.

“A unique and richly realised setting, a vivid cast, a plot that coils and divides and fakes and deceives… Ingenious, gripping, and full of pleasures on every level. Exceptional.”
Mike Carey (Author of The Unwritten, and the Felix Castor novels) 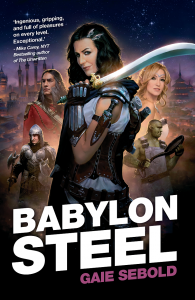 Babylon is not having a good week.  The Vessels of Purity are protesting against brothels, women in the trade are being attacked, it’s tax time, and there’s not enough money to pay the bill.  So when the mysterious Darask Fain offers her a job finding a missing girl, Babylon decides to take it.  But the missing girl is not what she seems, and neither is Darask Fain. In the meantime twomoon is approaching, and more than just a few night’s takings are at risk when Babylon’s hidden past reaches out to grab her by the throat.

The first book in the Babylon Steel series. 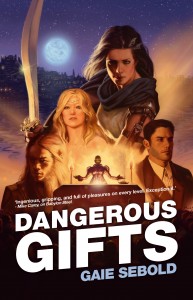 Babylon Steel, former avatar of the goddess of sex and war, owner of the Scarlet Lantern brothel, has been offered a job as bodyguard to Enthemmerlee, candidate for the Council of Incandress; and as spy for the barelyacknowledged government of Scalentine. Incandress is on the verge of civil war. Enthemmerlee represents the hopes or fears of a large portion of its population and is a prime target for assassination. Babylon attempts to turn Enthemmerlee’s useless household guard into a disciplined fighting force, dodge the Moral Statutes and the unwilling presence of a very annoyed Scalentine diplomat. Keeping both herself and her client alive is a hard job that only gets harder. And that s before she is driven to a choice that has terrible and far-reaching consequences…

Another Babylon Steel novel is in the works. This one involving families, kidnapping, arena fights and interplanar politics.