I am very happy to announce that my novella for Newcon Press – A Hazardous Engagement – is now available for pre-order.  It has a fabulous cover by artist Duncan Kay and is part of a four-book set including stories by  Kari Sperring, Edward Cox and Gavin G Smith.

Madis Defranthea’s brother presents her with a challenge.  If she wants to join his gang, she and her team have to steal a magical belt that’s locked to the waist of a bride, on her wedding night, in a fortified castle, on a rock in the middle of the sea.
Madis takes him up on it. But when she discovers just how much her brother didn’t know, the job proves even more hazardous than she bargained for…
Featuring magic, automata, snobbery, small gods, large fish,  a useful corpse and an unnervingly intelligent horse. 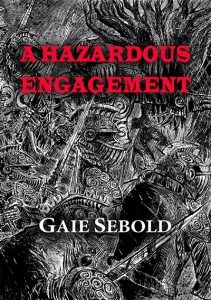 So there you go!
I also have a short story in the forthcoming Once Upon a Parsec: the Book of Alien Fairytales.

Have you ever wondered what the fairy tales of alien cultures are like? For hundreds of years scholars and writers have collected and retold folk and fairy stories from around our world. They are not alone. On distant planets alien chroniclers have done the same. For just as our world is steeped in legends and half-remembered truths of the mystic and the magical, so are theirs.

Now, for the first time, we can share some of these tales with you…

Cover artist for this one is the splendid Ben Baldwin. I am delighted to be in an anthology with such leading lights as Liz Williams, Adrian Tchaikovsky, Jaine Fenn, Allan Ashley….This grab-bag of gorgeousness is also available to pre-order.
In other news, this time last year everything in the garden was going crispy under the blistering sun.  This year everything’s afloat and the slugs are on a slow but appallingly effective rampage.  Alas, my poor brassicas.
Tell your friends!